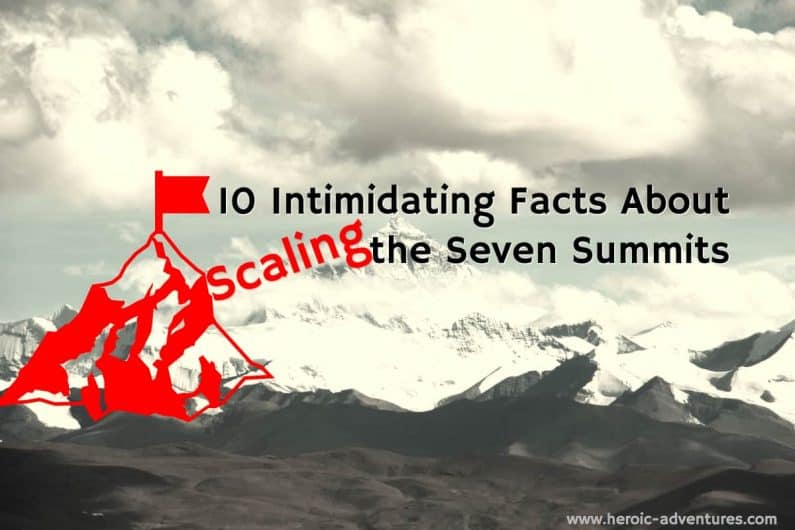 If you don’t think you have the strength, willpower or mental fortitude to climb the highest peaks on every single continent, you’re not alone–only around 350 people, as of January 2012, have actually had the guts–and money–to accomplish this formidable task.

Adding to the challenge is the fact that, depending on whom you talk to, there are actually eight summits to climb if you want to have truly mastered this feat. If you dream big about mountaineering, wait a tic–scaling these majestic peaks is much more intimidating than you might have ever imagined.

Disputes about geographical boundaries mean that the Seven Summits have evolved into eight summits–when Dick Bass first completed the challenge in 1985, he climbed these seven peaks:

However, Pat Morrow, another climber to scale the mountains early on, determined that another peak, Carstensz Pyramid (also known as Puncak Jaya) was the highest point on the Australian continent–not Kosciusko. 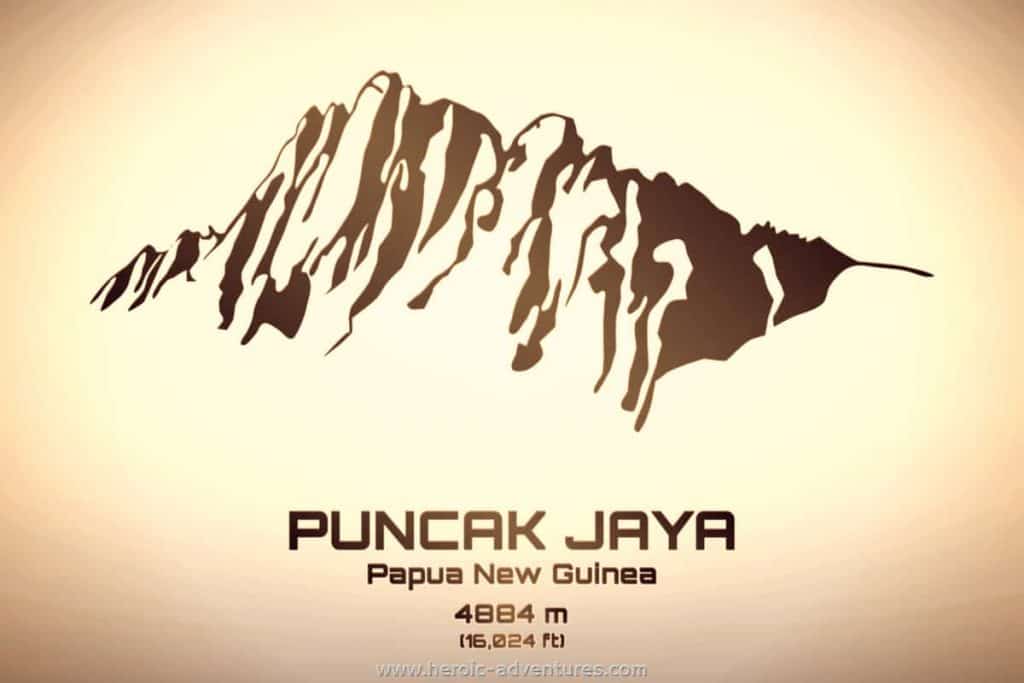 Carstensz is reputed to be significantly more challenge due to its steep vertical incline.

Morrow justified his decision by saying that the continental shelf on which Carstensz Pyramid resides is part of the Australian continent.

Reinhold Messner, a noted mountaineer, agreed with Morrow, and this variation become known as the “Messner List.”

Of the 350 people who have laid claim to completing the Seven Summits, just 30 percent have climbed both Kosciuszko and Carstensz–meaning they’ve done all eight summits. The latter is a more technically challenging climb and at 4,884 meters (16,023.6 feet), it’s more than double Kosciuszko’s 2,228 meters (7,309.7 feet).

There’s another controversy about the European mountain; however, it’s not widespread enough to make a switch on either of the official lists:

Mount Elbrus, Europe’s highest peak at 5,642 meters (18,510) feet, is located on the Asia-Europe border as part of the Caucasus Range.

The majority of geographers place the peak in Europe; however, a few claim it’s actually in Asia–and that would make Mount Blanc Europe’s highest peak at 4,810 meters (15,781 feet). Therefore, you might someday have to scale nine mountains to truly be victorious. 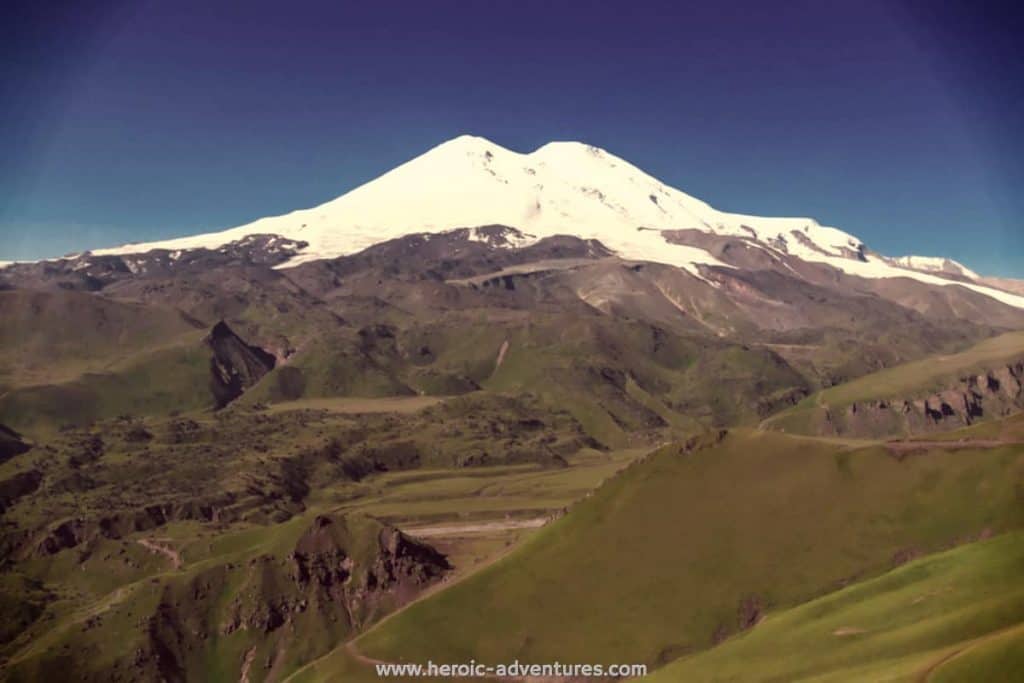 The total sum to climb all Seven Summits varies widely based on your approach, your gear, your team and other factors. Generally speaking, though, it’s a pretty hefty chunk of change — a ballpark resides anywhere between $130,000 to $220,000. 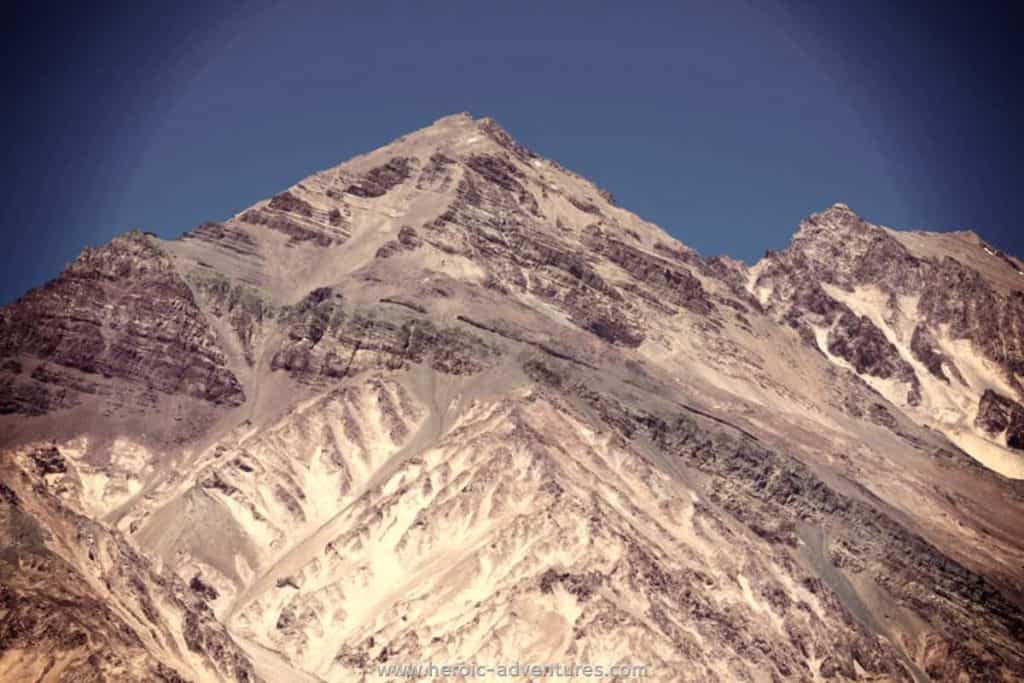 Aconcagua, reputedly the most affordable of the 7 summits to climb.

On top of the costs, it takes a lot of your time to go on these expeditions.

Mount Everest alone takes an average of six to seven weeks to climb, even though it only takes five days to reach the summit–you must acclimate to the thin air for safety purposes.

Therefore, holding down a job can be quite difficult unless you have the most understanding of employers–or a whole lot of vacation time.

There’s no official report as to how many people have died climbing all Seven Summits.

However, as of 2013, nearly 250 people had died trying to ascend Mount Everest alone–and then in April 2014, another 16 were killed in one day in one horrific avalanche. 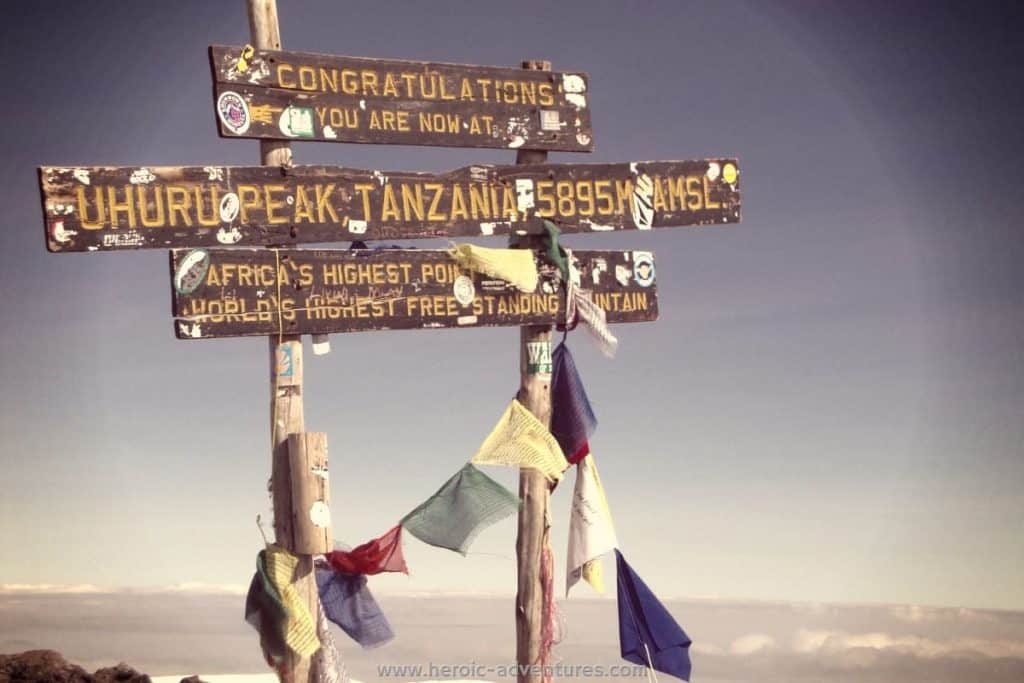 Kilimanjaro summit, the roof of Africa.

Every year, 10 deaths are reported on Mount Kilimanjaro, though the numbers are conflicting. In January 2009, five people died climbing Aconcagua. In other words, these mountains are deadly.

On some mountains, such as Everest, the risk and cost of recovering a dead body is too high–meaning future climbers can still see the eerie forms lying in the ice as they make their own ascent.

In fact, more than 200 dead bodies are still on Everest. Climbers have to maneuver past them on their way to the summit.

The total elevation of all the eight summits put together equals 45,592 meters (149,580 feet). That’s approximately five times the height of the average airliner’s cruising altitude of 30,000 feet.

6. It’s Pretty Cold Up There

You know that $8,000 to $13,000 you spent on gear and clothing to climb? It just might be worth it, as you’ll need warm clothing in these conditions.

It’s best to climb Mount Elbrus in July and August, but even then temperatures at night average a balmy 18 F (minus 8 C)–but that’s downright warm compared to some of the other peaks.

At night on the Carstensz Pyramid, the summit can be around 14 F (minus 10 C) and it rains for several hours a day.

On Everest, summit temperatures range from minus 4 F to minus 31 F, with wind speeds of up to 175 mph.

At Mount McKinley, also known as Denali, temperatures in early May–the earliest time of year you can begin to safely climb–can hover around minus 50F.

7. Getting to the Mountain

In some cases, it’s no easy feat to simply arrive at the base of the mountain to begin to climb.

To reach Carstensz Pyramid, for example, you have to make your way through West Papua New Guinea’s tropical jungle.

Add in government issues, political instability and tribal wars and it’s no wonder that it’s one of the least-climbed of the Seven Summits.

Even the trek to the base camp of Everest means getting to 17,590 feet–higher than the summit of some of the other mountains on the list. Some climbers choose to simply make the journey to the base camp, a difficult hike with a rewarding payoff that’s significantly less dangerous than going to the very top. 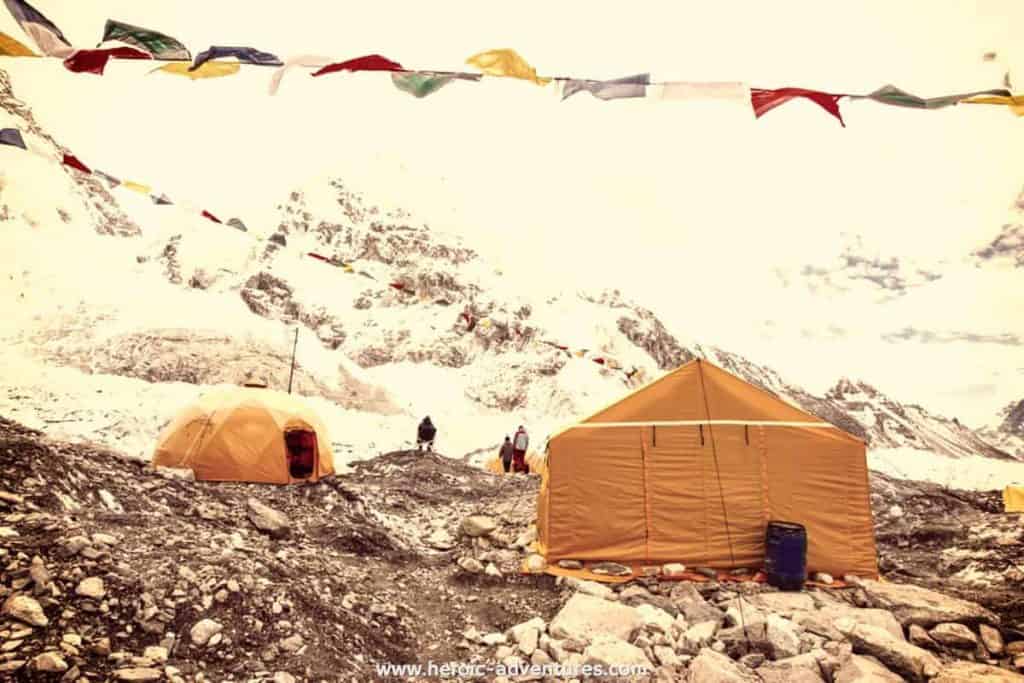 Everest base camp, some climbers only venture this far and have no intention of reaching the peak.

So many of the mountains are remote, as well, meaning that getting medical help in an emergency can be difficult. As you might expect from its location in Antarctica, the area surrounding Mount Vinson is entirely undeveloped. While Vinson’s not a technically challenging climb, the cold and location make it extremely risky.

This is where the altitude is so high that the risk of death increases substantially.

It’s found on Mount Everest above approximately 8,000 meters (26,246 feet). Your body cannot replenish its oxygen store at this height, as there’s only one-third as much oxygen in the air as at sea level. If you have asthma, you might want to skip this one.

9. You Won’t Be the Youngest

If you thought you might be able to break a record due to your age, think again.

After scaling Vinson in Antarctica on December 24, 2011, then-15-year-old Jordan Romero became the youngest person to officially scale the seven peaks. The American-born Romero beat the previous record, set earlier in 2011 by a 16-year-old Brit. 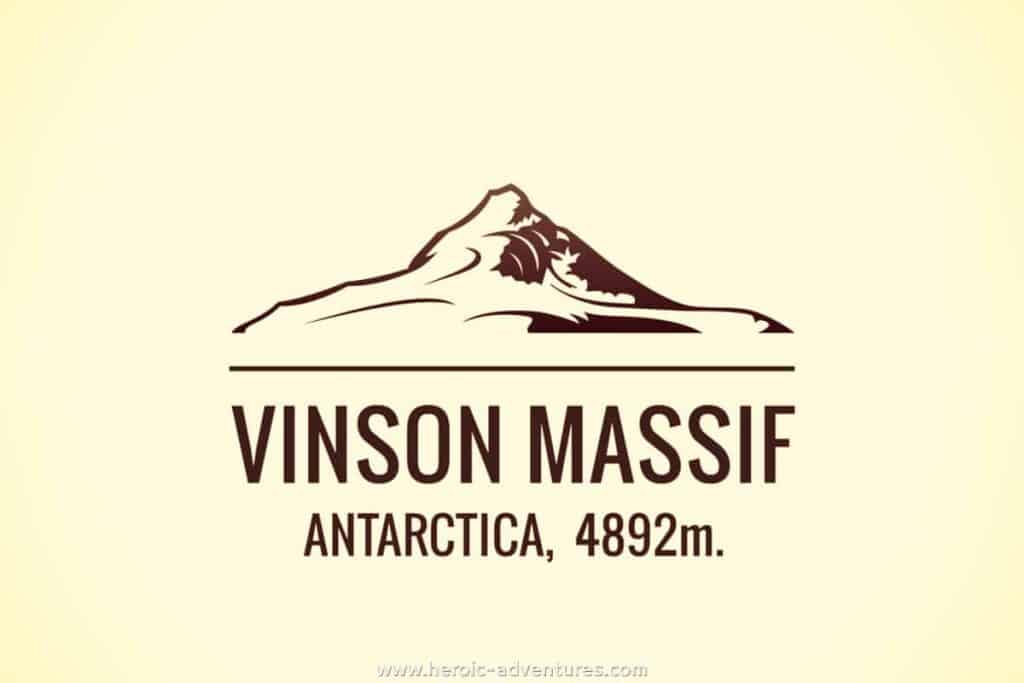 Mount Vinson, one of the Seven Summits located in Antarctica.

Setting records wasn’t new to the teen; he conquered Mount Everest at age 13.

Unlike some other climbers, Romero has scaled both Carstensz Pyramid and Kosciuszko.

It took Romero six years to achieve all Seven Summits, compared to the record-holding 134 days achieved in 2010 by Vern Tejas–who once held the record as the youngest Seven Summits climber.

10. Next Up: The Second Summits

The final intimidation factor of climbing the Seven Summits is realizing that, despite this achievement, some serious climbers might still scoff at you for not having done the harder versions–that is, the more technically challenging, albeit slightly lower, second-highest summits on each continent.

This is comprised of the following more difficult and deadly mountains:

However, you’ll be in good company, as all seven Second Summits weren’t scaled until 2012 when Hans Kammerlander completed the challenge. He remains the only person to have completed this feat.

The difference in danger between K2 and Mount Everest, both located in Asia, is particularly notable; in 2009 and 2010, nobody attempted to scale K2 at all because of potential death. Additionally, while Everest has a 4.14 percent death rate, K2’s is 26.47 percent. That means that approximately 1 in every 4 climbers that attempts K2 loses their life doing so.

Do you have the mental fortitude to scale all Seven Summits?

Do so, and you’ll go down in history as one of just a few hundred who have been able to do so.

Adventures Await – What Mountains Will You Conquer?