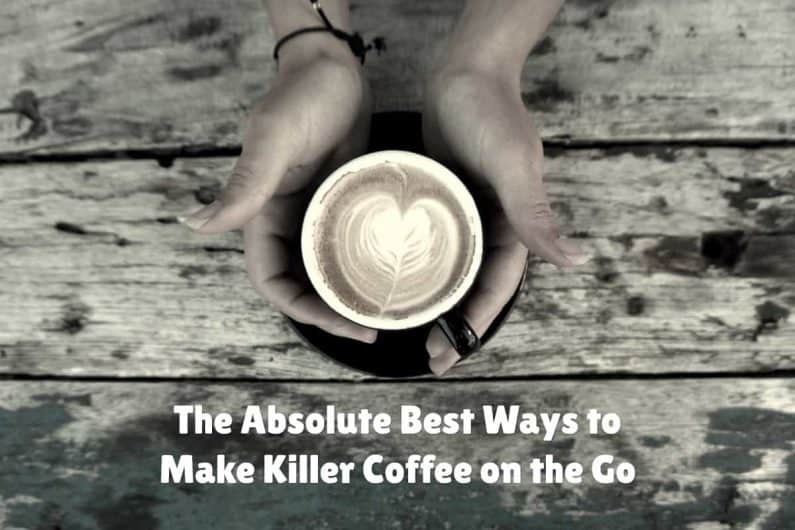 Let’s talk about coffee. The nectar of the gods. The wake up juice that keeps you going, morning, noon, and night. One of the few stimulants that is legal/doesn’t destroy/rarely makes you hallucinate.

Us coffee drinkers have been accused of having an “addiction”, but they’ve got it all wrong: we have a blessed, symbiotic relationship.

We get the crackling energy and the coffee gets the pleasure of tobogganing through our digestive system.

It’s been said that you can have too much of a good thing, but those haters have clearly never felt the sweet bliss of hot coffee in the morning. Or at lunch time. Or in the afternoon. Or really, any time.

Of course, there is one challenge… 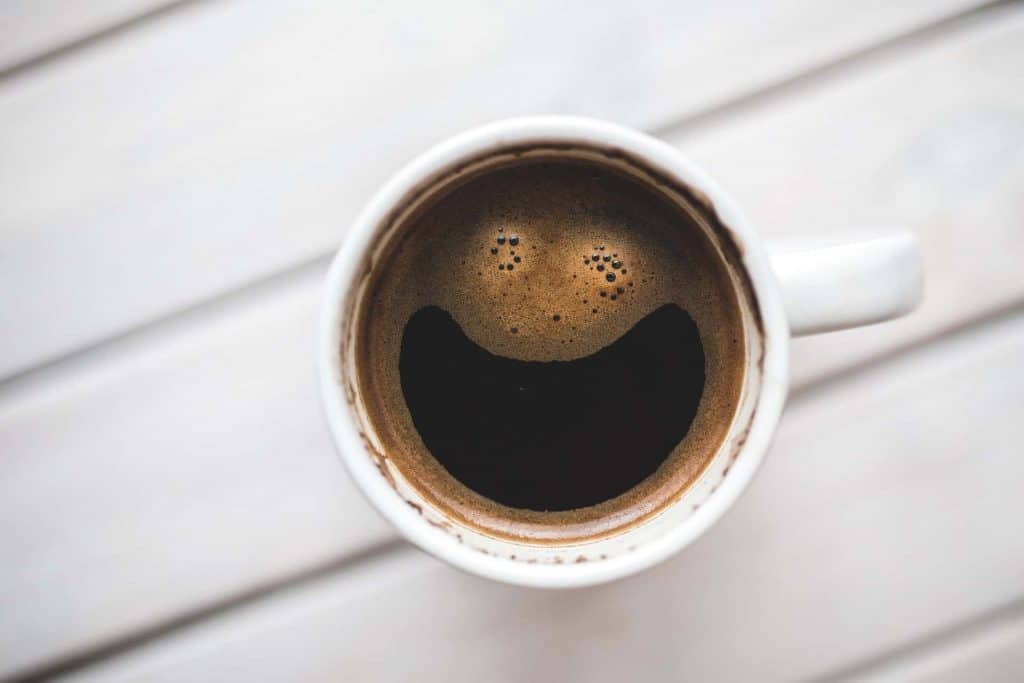 How do you keep yourself constantly supplied with good coffee?

It’s a well known fact that coffee quality tends to dip when you travel. You find yourself gagging down hotel coffee, which often tastes like melted linoleum, except with less flavor.

If things really get bad, you may be forced to drink gas station coffee, which is the equivalent of scooping sludge out of a septic tank.

Thankfully, you don’t have to go into coffee rehab in order to survive when you travel.

There are a number of portable solutions that will allow you to drink astoundingly good coffee wherever you go. You won’t have to settle for McDonald’s sock water or Maxwell “Sweet mother, what is this?” House. You can have your coffee, and drink it too.

In this post, I’m going to break down the best portable coffee makers. No, I’m not going to suggest you lug around a drip coffee maker. You’re going to get the best of the best. And you won’t have to deplete your savings account either.

What You May Need For That Perfect Cup

Before we dive into the best small coffee makers, we need to talk about what you may need to make the most glorious, soul-shaking cup of coffee.

Small Coffee Makers that You Can Travel With

Here are our top picks for tested small coffee makers you will want to take on your next outing. Across town or around the world with these gadgets you won’t have to worry about missing your coffee fix.

If you are an espresso fiend, the NowPresso is sure to become your go to brewer of choice>>>

This baby is the world’s first lithium powered portable espresso machine, and it’s basically like having a personal Italian barista named Roberto.

Using Nespresso Cups, and NowPresso’s own reusable capsules–which allow you to prepare your own coffee mixtures–you can literally create silky smooth, flavorful espresso with the touch of a button.

It has an air vent lid to allow steam to escape, a water cavity for simple cleaning and measuring the water, a vacuum sealed capsule cap, ensuring the perfect pour, and a heat resistant silicon cup. It will even boil the water for you.

The NowPresso is every coffee drinker’s fantasy:

It also comes with a slick travel bag, allowing you to transport the NowPresso without losing things or dumping them on the ground.

Whether you’re a traveler, camper, hobo, or nomadic camel herder, this is a fantastic solution to get a quick fix where you have control over the quality of your coffee.

To be one of the first coffee drinker to own one of these curious coffee contraptions, you better act fast because the NowPresso by XSPROFIX reached it’s

Get the NowPresso on Amazon here >>>

The NowPresso, like other copycats that have followed it’s lead, is tooled to use Nespresso Coffee pods. You can also buy a reusable coffee capsule that allows you to then use the machine with whatever coffee grounds you choose. We recommend the reusable option for environmental reasons, as there are pro and cons surrounding the use of disposable coffee pods.

The Pros and Cons of Coffee Pods

Coffee pods are aluminum or plastic containers of pre-measured grounds. They feature built-in paper filters. Some companies refer to them as “capsules.” Pods have several major benefits and drawbacks.

This product offers tremendous convenience. It delivers a fast, simple brewing process; there’s no need to use separate filters or a teaspoon. However, you can’t precisely control the amount of grounds.

Individual units normally stay fresh for a long time. On the other hand, an entire package of instant or ground coffee begins to age when you open it. Air exposure causes the flavor to degrade as time passes.

Pod-based beverage makers use electrical power and water in slightly more efficient ways. This may result in lower utility bills, especially if you brew multiple drinks every day.

Environmentalists dislike this system because it wastes natural resources by using far more packaging materials than most alternatives. Some pods remain difficult or impossible to recycle.

Although it’s more affordable to use a pod instead of visiting a high-end cafe, it certainly doesn’t provide the most economical option. Both instant and regular ground coffee cost far less.

You’ll need to purchase a specialized appliance before using pods. Unfortunately, it isn’t possible to brew them in a standard machine. Pod coffee makers cost a bit more than basic conventional units.

This product provides a convenient way to rapidly brew beverages while maximizing freshness. However, it typically results in higher expenses and produces waste materials in larger quantities. 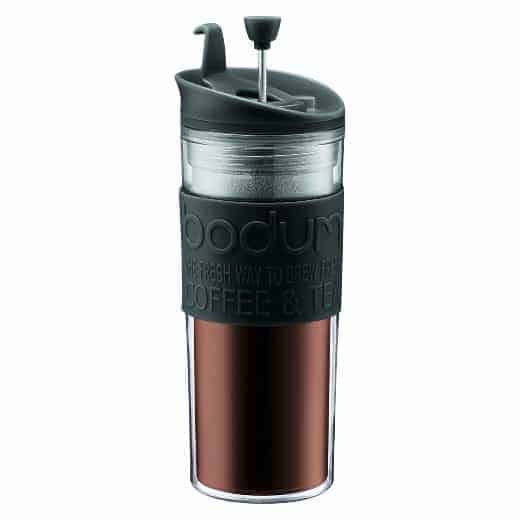 If you like your coffee like your soul (dark, slightly gritty, acidic), the French Press method is perfect.

You grind your coffee to a coarse texture, then let it soak in boiling water for 3-4 minutes. This method produces a full-flavored, somewhat smoky flavor (like kissing your girlfriend who smokes two packs a day).

There are plenty of travel mug options available, including the Bodum French Press Mug as well as one from Starbucks.

One downside of the French Press method is that there’s usually a bit of grit/coffee sludge in your coffee since the plunger doesn’t usually filter out all the coffee grounds. It’s usually not a big deal though, especially if you’re the kind of person who likes crunching on coffee grounds in their spare time.

You could also pretend you’re a cowboy, minus the horse, leather chaps, overt masculinity, and constant Marlboro cigarette. Your call. 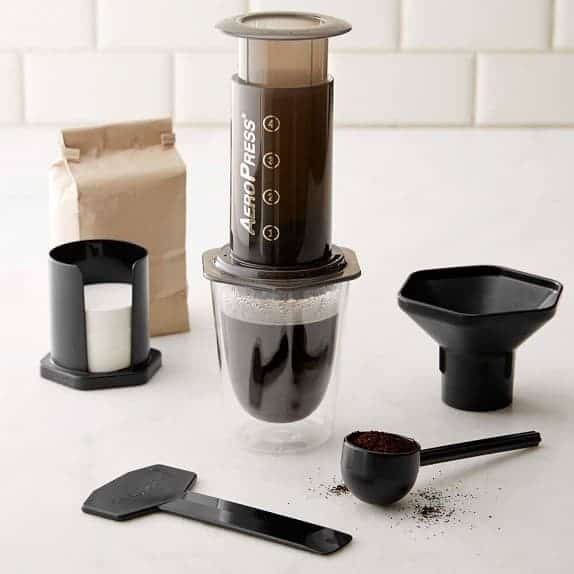 Fun fact of the day that you can use to impress/turn off dates: the AeroPress was invented by the same guy who created the Aerobie.

When you want to further impress/turn off, you can point that Aeropress and Aerobie begin with the same four letters, which is a clue to their creator.

You’d think that a frisbee inventor wouldn’t know much about coffee making (a common stereotype), but you’d be wrong. The Aerobie makes a fantastic cup of coffee that’s smoother than a politician avoiding questions about financial impropriety.

The AeroPress is placed on a mug and finely ground coffee is placed in the press on a filter. Hot water is poured on the coffee and you immediately begin depressing the plunger. A vacuum seal is created and the coffee is forced down through the filter, resulting in a flavorful, smooth cup of coffee that makes you smack your lips in a slightly creepy way reminiscent of Hannibal Lecter.

It works so effectively because the coffee and water aren’t in contact that long – usually 20 seconds or so – which results in very little acidity. It’s a pretty amazing feat of engineering actually.

It only has a few parts, which makes it perfect for traveling. The only downside is that you’ll need to have a way to heat your water. 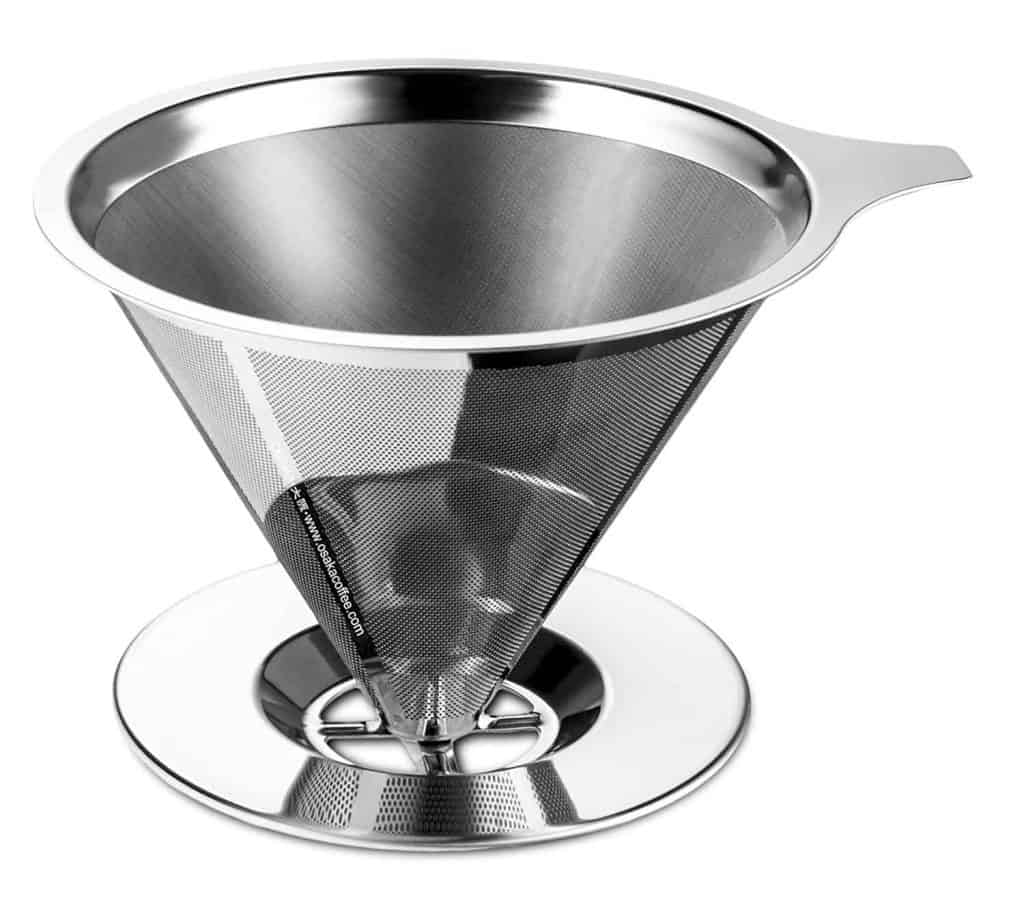 The pour over method of coffee making is a great, all around option.

It’s like a middle ground between all other other methods. It gives you a well rounded flavor that’s not overly smooth like the AeroPress but also not brutally acidic like the French Press. You grind the coffee finer than the French Press but coarser than AeroPress.

If this were (trigger warning) high-school, the pour over would be the guy who everyone kinda liked but who didn’t get the hot girls. The guy voted most likely to work as a mid-level manager at IBM. Right down the middle. Granted, this would be a private school, since the pour over still makes great coffee. It’s still an elite snob.

The cone is placed on the coffee cup, the filter goes in the cone, the grounds go in the filter, and the water seals the deal.

If you’re hardcore, you can use the “bloom” method, where you initially just wet the grounds enough to let the carbon dioxide escape and the flavors expand.

All you need is the cone, the filters, and coffee, all of which can be easily transported in an a bag. It’s easy to clean, takes up minimal space, and delivers a great cup of coffee. 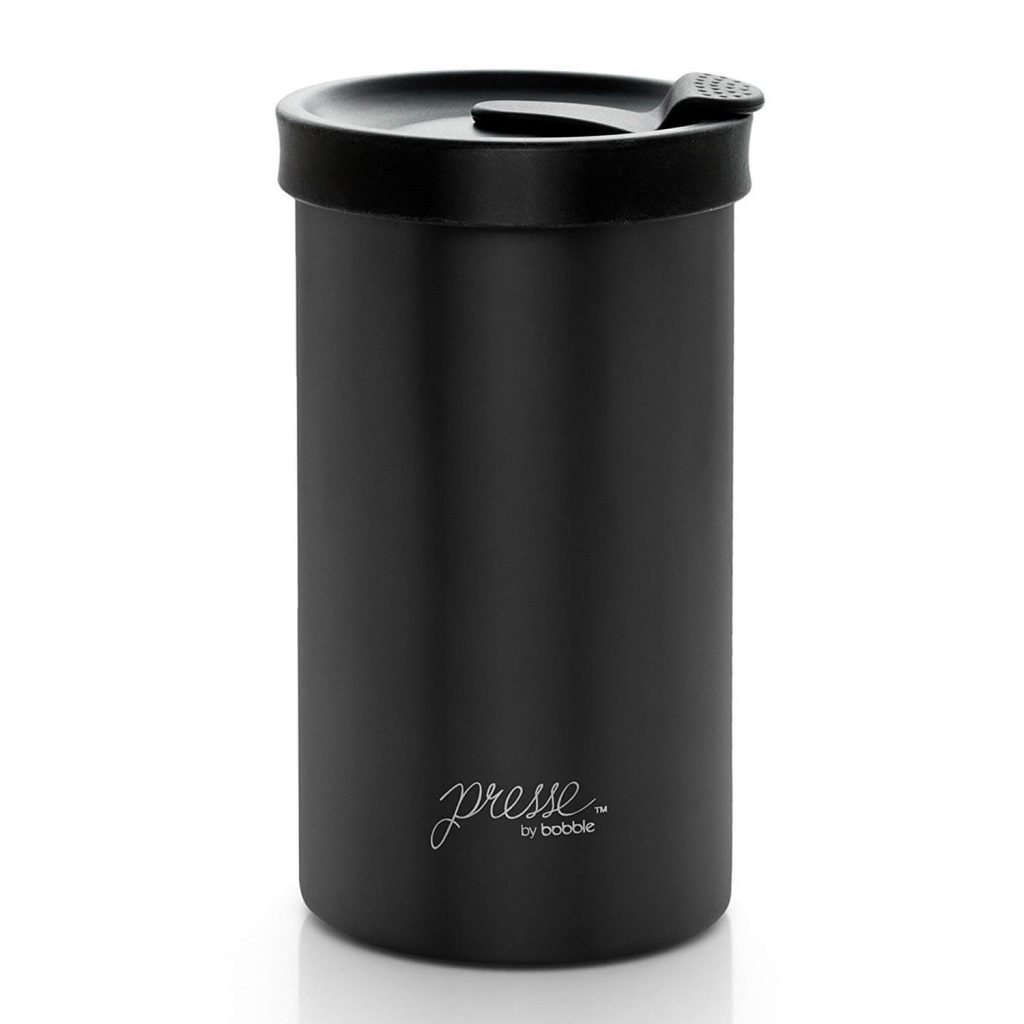 It’s a well-known saying that the you can judge a man by the coffee he drinks.

Actually, no one says that, but it should be a saying. Never trust a guy who drinks crappy coffee.

Regardless, the Presse Coffee Brewer allows you to impress (see what I did there?) people with your taste in coffee.

It’s essentially like a French Press, except it has a finer mesh filter, meaning you won’t find yourself accidentally munching on coffee grounds. It only has three parts and doubles as a travel mug, so it’s insanely portable as well.

It should be noted that the lid IS NOT LEAKPROOF! In other words, if this thing is full of coffee/liquor, don’t throw it into your bag next to your laptop.

Nevertheless, this is a good solution that lies somewhere between the AeroPress and the French Press travel mug. 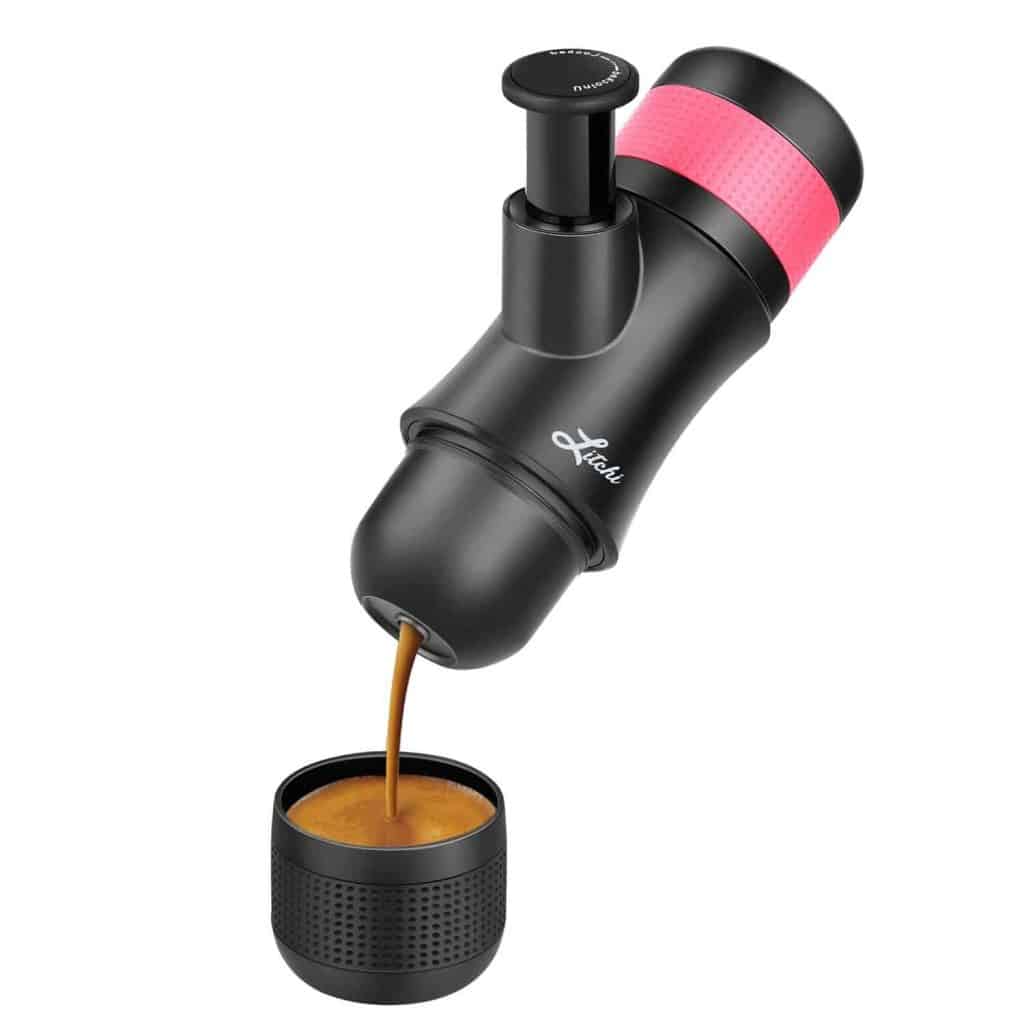 If you’re an avid camper or hiker who also has a deep passion for espresso, this could have some potential.

The Lichti Portable Espresso Maker is battery free, meaning that the only way to create that espresso shot you’re craving is to use the hand pump that’s built in. Think of like pumping water from a well, except the water gives you immortality and boundless energy.

The pump puts the appropriate amount of pressure on the water and espresso, resulting in a well-crafted espresso shot to soothe your jangling nerves.

The downside here is that you’ll need to grind your own coffee beforehand. If you find yourself in a situation without a grinder, you’re only option will be to grind the beans with your teeth, which doesn’t work particularly well.

Small Coffee Maker Options to Keep You Caffeinated On The Go

Coffee is life and life is coffee.

As the great Dalai Lama said, “The only way to survive in the crazy-ass world is to drink a ton of coffee.” Well, he might not have said that, but it sounds like something he would say.

Thankfully, you don’t have to go without coffee when you’re traveling if you pack along one of the above small coffee makers.

You won’t suffer the crippling darkness that befalls you when you go without your coffee. Rather, every step will be sunshine and energy. You will go about your day with a bounce in your step and a vibrating caffeine buzz.

So get to it. Get your coffee on. After all, it’s been about 5 minutes since you had your last cup.

More For Your Coffee Adventures