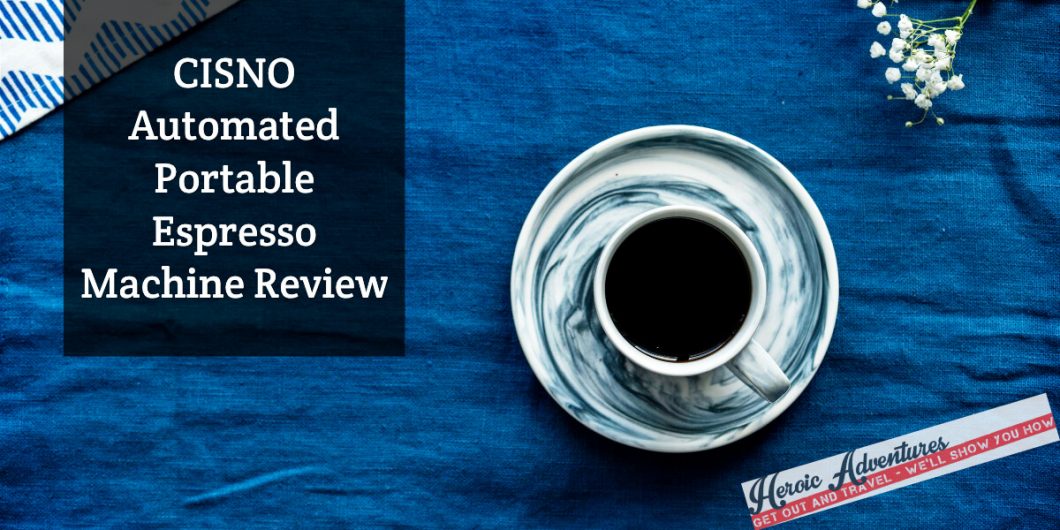 ​When a perfectly brewed cup of espresso is the only thing you can think about in the morning, it can be tough to go without it. And while you could get one from the local shop, it's not always an option. Or worse, you could end up with an espresso you wish you hadn't tasted.

Manual portable espresso machines work, but they rarely produce the right amount of crema. And you don't always have access to hot water or have the time to pump the water through the grounds manually. The CISNO Automated Portable Espresso Machine eliminates both those problems, so we thought it was worth a closer look.

Quick Navigation
​Who Is This Product For?
​What's Included?
​Overview of Features
​How to Use
​Alternative
​Conclusion

​This automated portable espresso maker is an elite model made by CISNO, which specializes in feature-rich, "smart home" kitchen appliances.

Rather than creating a ton of products, however, CISNO only produces three items. This portable model is the only espresso machine the company makes. Instead of using flashy advertising, the company lets its products speak for themselves.

The futuristic, luxurious design gives the espresso machine a streamlined appearance. But it's the adaptability of this product and its single-button operation that make it a popular choice for espresso enthusiasts.

​Who Is This Product For?

​The CISNO designed its portable espresso machine for coffee lovers who won't compromise when it comes to the quality of their espresso even when they're on the go.

It runs off a battery, but it also runs and charges using either an AC or 12V car adapter, which are both included with the machine. This flexibility means people who spend a lot of time in a vehicle or take a lot of weekend camping trips will like it, too.

​Each machine arrives with a battery pack, 12V car charger, instruction booklet, and an AC adaptor.

Additional batteries and chargers for the espresso machine are available for purchase separately.

​The CISNO Automated Portable Espresso Maker gets five stars for ease of use. It works with hot or cold water and runs on battery, AC, or 12V power. And the design only has one button, so you don't have to play with it to figure out how to run it.

Because it was explicitly designed to produce a perfect espresso each time, it tends to outshine other machines in its class. Users give the CISNO machine high praise for the crema and authentic taste of its 1.35 oz shots. These shots are also hotter than those produced by manual systems.

While CISNO portable espresso maker comes in at just over two pounds and ten inches in height, it fits most automotive cup holders.

The capsule design could be easily mistaken for a modern thermos if it wasn't for the multi-function button on its face.

There are no parts to get lost, nothing to break off, or flimsy hinges to wear out.

The most significant feature of an automatic portable espresso maker is its battery.

​To make a perfect cup of espresso with the CISNO portable machine, unscrew the cup and insert a Nespresso pod.

Then, flip it over, unscrew the top, fill it with boiling or warm water, and press the button on the face to select the right mode.

It perks the espresso straight into the cup.

​The Revelux Electric Portable Espresso Coffee Maker is comparable to the CISNO machine.

It makes a 1.85 ounce shot and works with Nespresso-compatible capsules as well as refillable pods. Due to the added size, it does take an extra minute to brew the espresso.

The Revelex model costs a little less than the CISNO brand as well, but it doesn't have an AC adapter or battery, so you'll need to stick close to your vehicle to use it.

While being limited to 12V power can be problematic, others still prefer this model for its larger size and the ability to save money using refillable capsules.

It may seem odd that we are calling this product a NowPresso knockoff --> BUT, we must because Heroic Adventures has been following the deveolopment of the NowPresso since it's inception on Kickstarter.

We first reported about the NowPresso during it's Kickstarter launch way back in June 2017, you can see the article, which has been updated a few times here: The Absolute Best Small Coffee Makers to Brew Killer Coffee on the Go.

Anyhow, the Kickstarter, which we backed, shipped in November 2017. The CISNO knockoff showed up on Amazon.com shortly thereafter.

​So to sum up the points of this brief saga are:

Since then, November 2017, other NowPresso knockoffs have appeared but CISNO was the first of the knockoffs and a direct lineage from the original NowPresso.

It also out-performs many similar models, but that level of quality doesn't come cheap.

For many espresso enthusiasts, however, the ability to enjoy a quality espresso whenever they want is well worth the cost.