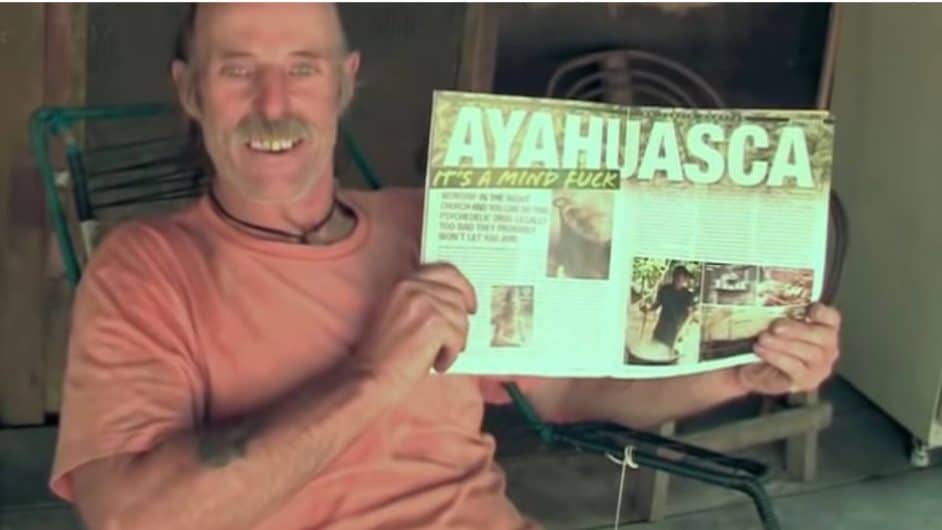 It was completely black when the drugs began to take hold.

Friends said to look for changes by the end of the third Icaro. They weren´t forthcoming; I asked for more of the Gringo Shaman’s notoriously potent ayahuasca brew…

Is the Gringo Shaman of Iquitos Santa?

The visions began but so did the vomiting:

Pastel pinks and silvers floated above me, disassociated entities tried to form but dissolved, a shadow loomed a dark silhouette eclipsed the colors but passed quickly as I returned to the avatar like terrain. Time slowly passed as I floated back toward surface world. The sanctuary of infinite modes of being slowly faded but not the nausea. I vomited my way back our world. My first Ayahuasca dream. 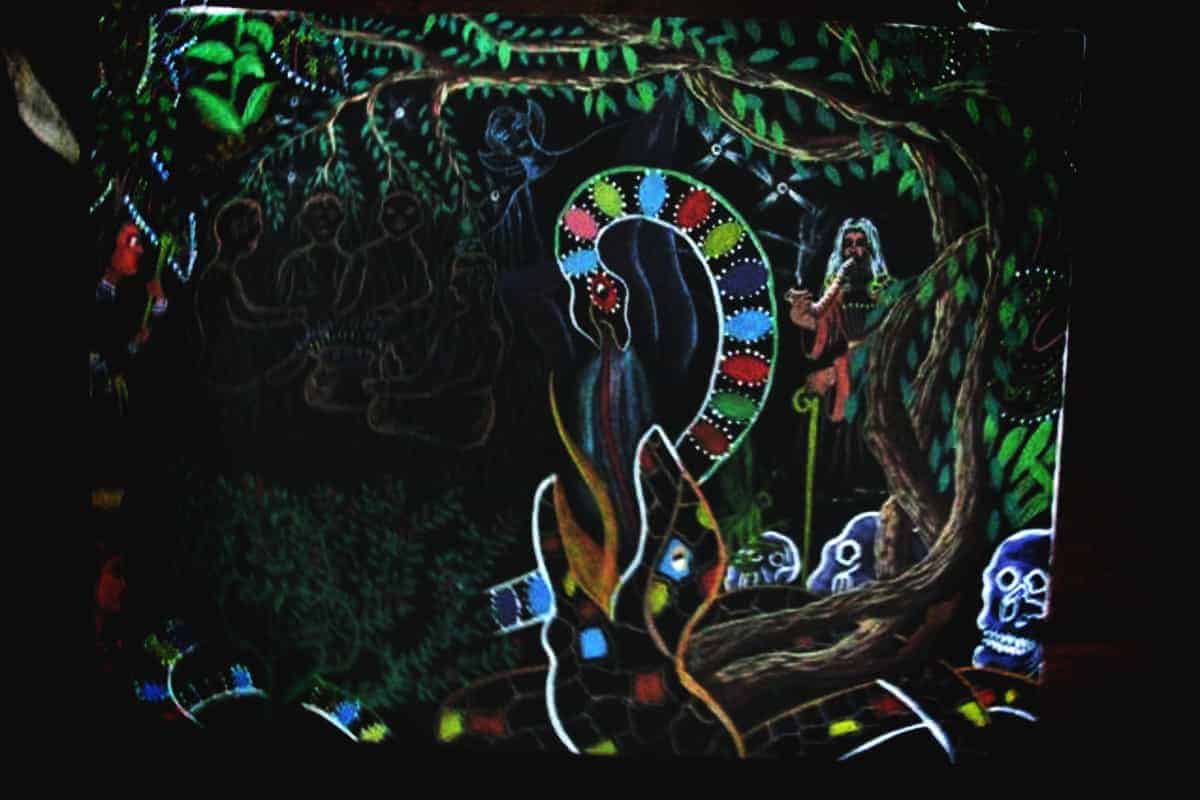 ‘Twas in Taganga one night as a group of the worthies were gathered for nocturnal palaver and brouhaha that a charming pirate named Peter O. ´regaled us with tales of the “import-export” business and his experiments in the Amazon with the vision vine.

Ayahuasca is a psychotropic plant that curanderos and shamans (medicine men or healers) have used for hundreds of years to transport themselves to other worlds on behalf of patients to seek cures.

This seemed like the time because P. my traveling partner was heading back to Pijao for the holidays for fiesta and siesta. I was tired of the overland travel and the rain that caused over 1000 road cuts in December and record floods. I headed to the Amazon to hunt for P. curendero-one Don Juan.

Until a few years ago the Ayahuasca experience was almost exclusively an indigenous practice. I had heard and read about these cures for 30 years in my travels throughout South America but never made my way to the amazon where the ritual exists.

Details were sketchy and not forthcoming but I made my way to Iquitos on the amazon after first flying to Leticia then getting the “fast” boat upstream. Once there, the trail grew cold as no one seemed to know of this shaman.

Keep Reading to Find Out the Ayahuasca Ingredients and the Ayawaska Recipe Process the Gringo Shaman of Iquitos uses to prepare his potent ayahuasca brew.

Luckily I bumped into a cadaverous-conspiracy-theorist named J. who kindly took me under his wing. Through him I met Bill G.–where are you Bill?–a much more reasonable, experienced and even-tempered-fellow who inspired confidence. This was important as I didn’t want to put my psyche at risk with some unknown quantity.

Bill had spent time as a member of the Santo Daime church, a Brazilian group who uses ayahuasca as their sacrament.

Bill seemed to be a true seeker–had taken “the medicine” (another term many serious and religious ayahuasca drinkers call the brew) approx 80 times and was talking of his recent experiences with a shaman named RON, popularly known as “The Gringo Shaman of the Amazon“.

Western sorcery in the form of trash culture has co-opted some of the traditional shamans and they now charge a lot of money and sleep with their western lady followers.

Enter the Southern fried Shaman, Ron Wheelock, (see video of The Gringo Shaman below) who studied with two different curenderos over a number of years and is devoted to the message and practice of the Ayahuasca ceremony.

Ron, the Gringo Shaman, lives in the forest on the edge of Iquitos but his origins are in Arkansas!

Bill said his previous ceremony with Ron had been the best ayahuasca experience of his life; now, that must mean something coming from an individual who has partaken of the ceremony more than 80 times. Hence, I felt better.

The ceremony starts about 9pm with a purification of the site by blowing Mapacho, a native tobacco, around the room to protect it from malevolent spirits. We were instructed to sit quietly with our eyes closed and keep control of our vomit bowl. You see to get something you must give something–ecstatic visions in exchange for your stomach contents! 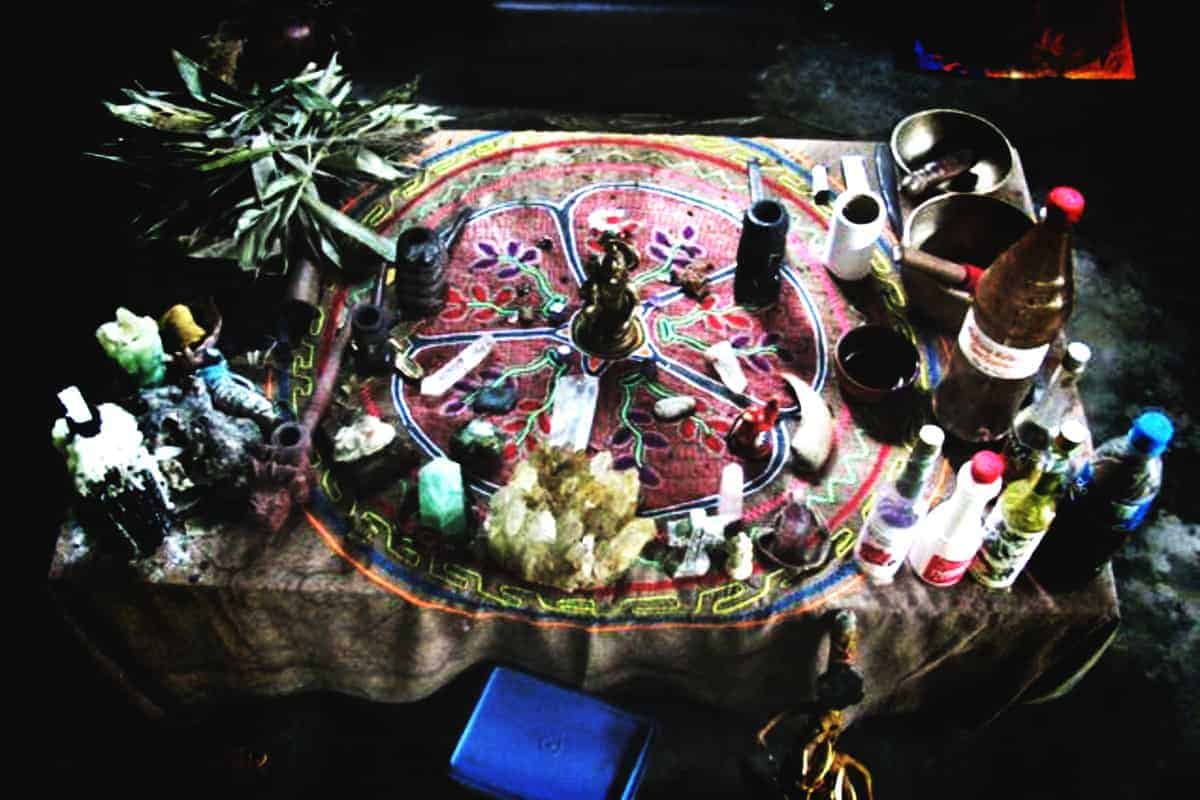 After more blessings we were called up one-by-one and took the medicine, which is best described as difficult to get down.

Think of a bunch of guys chewing tobacco and spitting it into an urn then adding some licorice, black pepper and a couple of dead moths suppurating at the bottom. They gave me an abbreviated portion the first time to see how I would react–I reacted slowly and needed more to reach the threshold dose described at the beginning.

After 4-5 hours of chanting, gongs, bells, and stringed instruments–all used in during the ceremonies icaros–the Gringo Shaman relit the candles and all participants then talked about their individual experiences during the ceremony.

The Gringo Shaman of Iquitos was pleased–I recounted my mild but satisfying experience and was invited back, if I wanted, to participate in a future ceremony.

It is said by many that you should experience ayawaska more than once.

So in the interest of rigorous scientific inquiry and thorough reportage, dear reader, yours truly–Bajaverde–once again put his gastrointestinal tract on the line.

With a full dose they cautioned of accompanying diarrhea in addition to the vomiting; so, I dutifully toted my shit-kit and placed it carefully next to the vomit bowl.

It had been an interval of four days since I’d first tried ayahuasca with the Gringo Shaman; and the day of the second ceremony, I kept disciplines and followed the recommended ayahuasca diet–no oil, sugar or salt.

Its important to have something in your system–you don’t want the dry heaves–the reality of losing your lunch is brutal enough.

I told guru Ron, or Mr. Gringo Shaman,  I was ready for the full dose.

I took it and managed to hang on to keep it down for what seemed like an hour or so.

Immediately I felt the effects of ingesting something questionable–weakness in the limbs and trembling, but this quickly passed, by the 3rd Icaro (chant), I became immersed within a world defined by otherworldly intense visions:

A bust of Tutankhamen floated by followed by a devil mask whose grin widened to the width of a white picket fence with snakes tongues flicking between the teeth.

Energy was radiating upwards as I began to feel the pulsing breathe and breadth of infinitude. I entered the hallways to “always” and groped my way to the altar for an additional dose–hell, I’ll ride this wave for all its worth. I took another half cup and found my senses heightened to the extent that I couldn’t tolerate the smell of my vomit bowl; so, I made my way outside to dump it.

Likewise, I couldn’t get near the outhouse, the odor was overpowering. I returned to my station, closed my eyes and resumed my visions now tempered somewhat morphing into Chinese porcelain pressed into the facades of Greek temples.

The golden emissaries of the other world slowly released their grip and I floated down to my place leaning against a pole on a cement floor in a darkened dorm on the outskirts of of Iquitos, Peru, planet earth.

I wondered then: Had the plant used me for its own ends spreading its influence through new devotees? 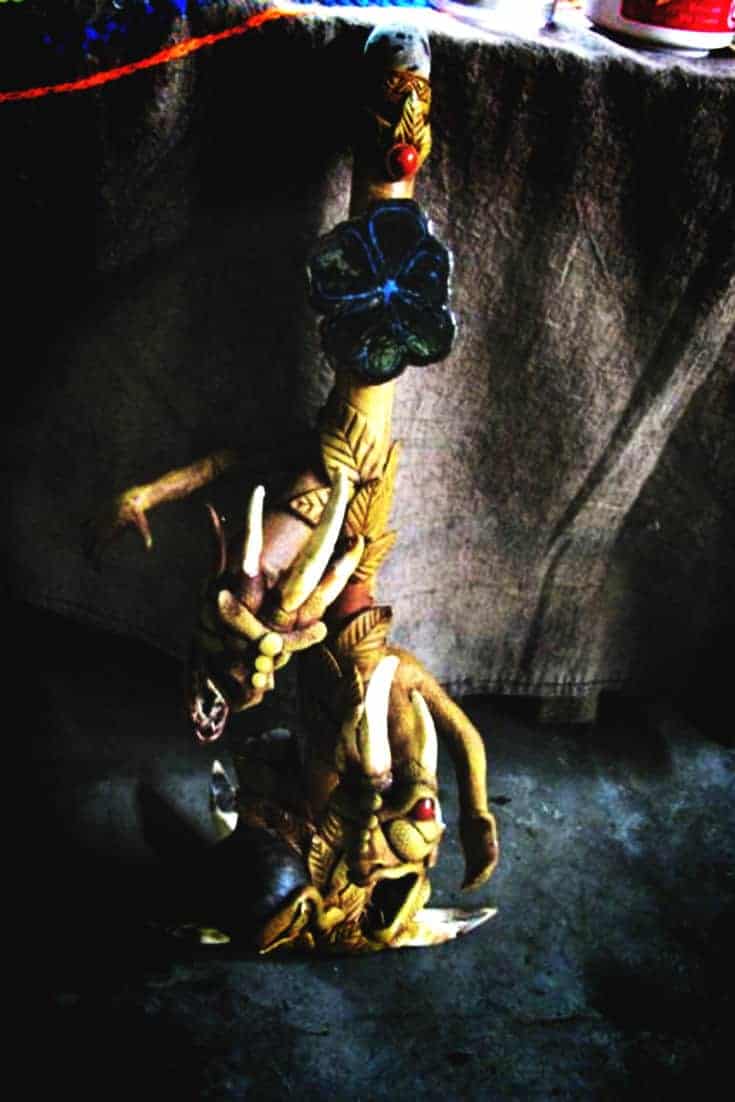 Each ceremony participant had a bed to sleep on as the ceremony ended at 1 am.

Later in the morning my senses were still overly acute the jungle was looking incredibly green and vivid, my brain seemed to be floating in a pool of serotonin.

Other than an abused stomach, I felt fantastic.

I made my way to the house and talked with the Shaman to discover what’s in all this ayahuasca brew anyhow.


Ron told me that his brew was as follow, or the constituent parts, ayahuasca ingredients, of his brew were roughly thus:

There are many kinds of Ayahuasca that grow wild on the Shaman’s property but he uses sky and black Ayahuasca.

I do not consider myself a spiritual buccaneer but I do have an adventurous spirit and an inquiring mind.

For years I have enjoyed the physical challenge I felt it was time for a psychic one.

Would I take it again? Definitely!

Thank you dear reader its time for your faithful correspondent to leave Amazonas and head north.

Continue the Ayahuasca Journey, our most popular AYAHUASCA posts are: 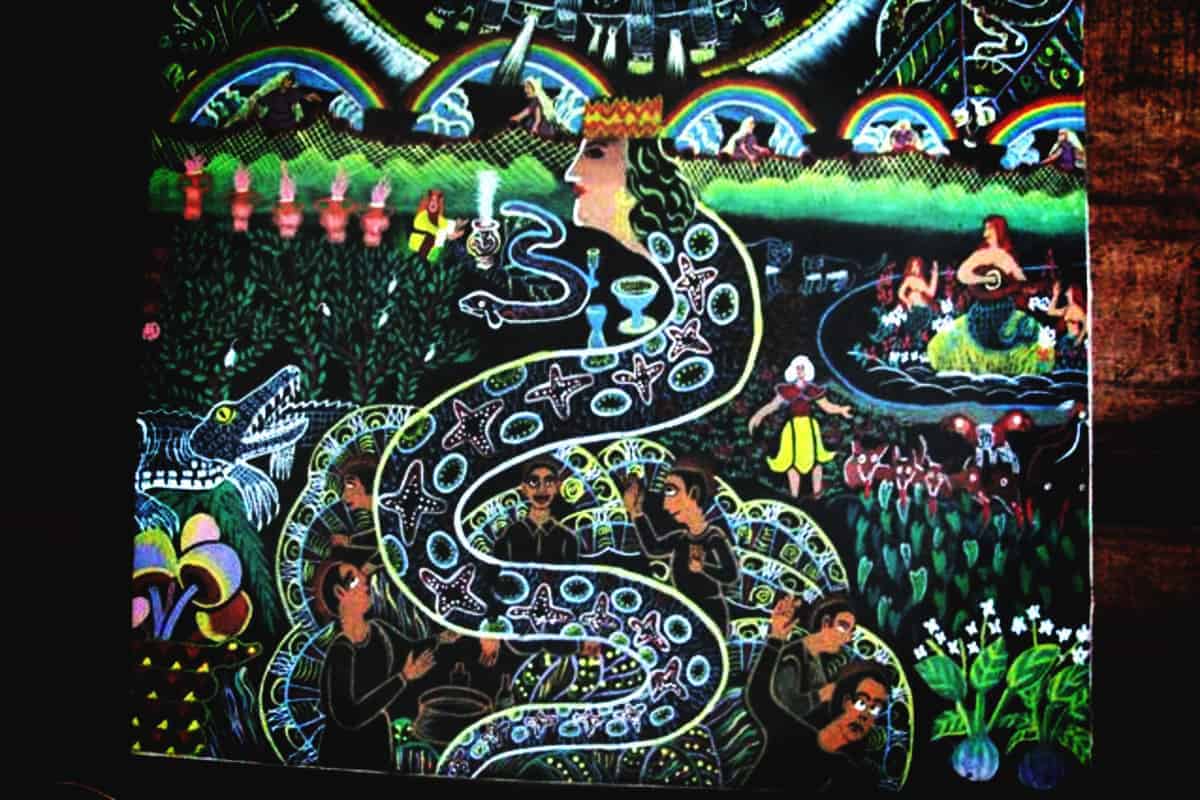 *The original title of this post was, “Zen Sarcasms: My First Ayahuasca Experience with the ‘Gringo Shaman’ of Iquitos“, so excuse the rambling travel tale, we all indulge now and then.