Kuyay, The Magical Healer From Pucallpa

It’s been a while since my last ceremony using the master plant ayahuasca, and I’m still feeling fortunate,  because of the fact that I found such an incredible lady shaman, Kuyay, here in my country, Costa Rica.

By the way, Kuyay doesn’t like the word shaman because this word can be misunderstood. Sometimes people associate it to bad things. She prefers to be referred to as a spiritual guide or something more proper.

From the first moment that I read about the ayahuasca I knew that it was my call, that I needed to look for it no matter what.

Costa Rica was in Kuyay’s destiny, she was in other Central America countries but it seems that she finally chose Costa Rica as the place to stay.

I don’t know and I don’t think there’s rational answer to that, the reasons seem more spiritual than rational.

The House of Light

Getting to Kuyay’s house, where the ayahuasca retreat takes place, is itself a memorable journey: her house is located at high altitude, and surrounded by lots of green mountains; yet, the best part of the trip is when you arrive.

Kuyay receives guests with a warm hug and a trusty smile. Feeling the vibe of this place is astounding, it feels so balanced with the nature, so natural, so quiet.

They grow their own food, use water from a natural fountain, and also have a special place were the ceremonies take place which I personally call “La Casa de la Luz”. The actual name of the area is  “El Guarco” or  “El Cerro de la Muerte”. 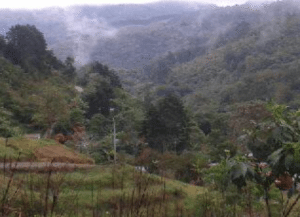 The View from Tejar, where ayahuasca ceremonies take place.

That’s the way how I imagine the house, full of light and spirits from all kinds living beings. The entities will help you during the ceremonies, by giving you their energy, you have to receive them honorably. They can be birds, squirrels, a deer or a snake, or maybe some sort of spiritual protectors that look just like those animals.

Grandmother Ayahuasca can specially appear in a vision in the form of a snake, a women, or like in one of my visions, some sort of nurse snake that was injecting me with probably a magical substance not from this dimension. You can sometimes feel it, like a huge snake rolling around your body.

Seeing “La Casa de Luz” in my head also reminds me that Kuyay is not a big fan of dark or mixed ceremonies. She likes to stay with the light but what does this really mean, regarding ceremonies…

What is a “light ceremony”?

Kuyay states that it’s not necessary to make the people see horrible things because such visions don’t help much. Kuyay only invites light and white energy to visit during her ceremonies.

But there’s a thing: ayahuasca ceremonies are like open portals for “beings” from other dimensions and sometimes a dark one can get through.

Kuyay is an expert on handling these types of energies that can take control of your ayahuasca metamorphosis, I’d say they can even get into your mind and show you a point of no return, something that you we’re not supposed to see, which can traumatize you.

I also think, that this type of situations can be the result of a weak participant attitude, or a weak preparation, or both. But these situations are unlikely since Kuyay interviews every potential ceremony participant before partaking of the sacred vine–not everyone is suitable to drink the vine of the death.

Yes I think that a negative participant or someone that has no respect at all, can trigger dark energies to enter. That’s one of the reasons why Kuyay always asks us to come early and talk with each other, maybe smoke a “mapacho” to relax, or a group meditation. Getting along with other ceremony participate is basic. 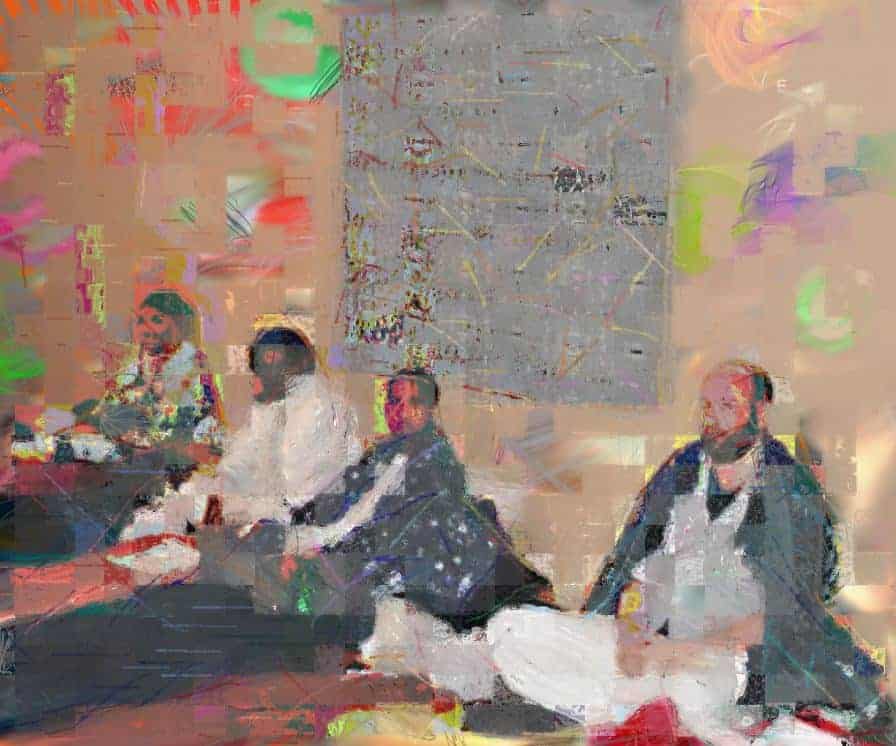 The Vine of Death

It’s called “the vine of the death” because old Peruvian traditions say that when you drink ayahuasca, you visit the world of “death”. It’s the ayahuasca vine that allows you to enter these worlds, without loosing your spirit, they say.

When you come to meet the grandmother ayahuasca it has to be with full respect and conscience.

It is important that we feel comfortable with the rest of the people, they will be with you all night and you will feel their spirits, just like when you feel the air coming from a ventilator, I know it’s a silly comparison, but you can find a more accurate one, regarding on how energy feels in many of the books that Carlos Castaneda has written. If they’re sad, happy, worried, stressed, angry, depressed, you will feel them and they will be able feel you too. Emotions can be contagious.

Kuyay is a responsible shaman, she always asks about other medicines that can effect the spiritual journey, special situations that you might be having, like duodenal diseases, respiratory issues, and heart problems. There are other special situations which may exclude you to participate, besides diseases.

Kuyay knows which one they are and it’s very important to be honest regarding such a huge responsibility, because the one that is more responsible for you, is yourself. You will be putting yourself in a giant risk if you are not suitable for ayahuasca, but you insist.

Everything is very symbolic in the ceremonies, Kuyay will call you and you have to come to her, and do a forehead union between you and her, while she is whispering and putting your hands around the ayahuasca cup, she blesses it with a very particular sound and then you drink it.

Kuyay will be checking on your status once in a while during the “elevacion”, specially asking if everything is ok, whispering into your ear, touching specific parts of your body to release blocked energy, she will sing beautiful icaros if required (just like hearing angels sing) and also checking on how much more ayahuasca you need.

She doesn’t like rushing anything. If she needs to wait another half hour to make sure you need more ayahuasca, she will do it. She will not give you more ayahuasca if you want to be super high, everything is a process.

I didn’t have any visions in my first ceremony and it was not necessary. A part of me wanted to see the whole universe in those visions but when I ask her for the third row she asked me why, and I said that because I haven’t had any visions, which to she answered that, not every time one needs to see visions. She saved me from myself–maybe, too much ayahuasca could be difficult to handle for someone that, at that time, was not even in touch with meditation.

This is something very positive that I notice from her, Kuyay really takes care of the people as if she was taking care of herself. She will teach you anything you need to be to know, I can proudly say that she was my first meditation teacher also (you see why shaman is not a correct word).

“To a distant dream you are taking me, ayahuasca of my soul, to show me the mysteries of life.” 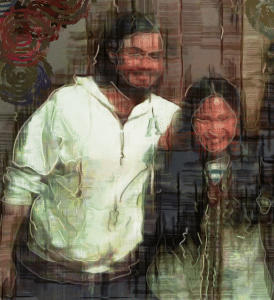 Once, she slept in La Casa de la Luz, to check on us and to be with us, it was really intense that night, normally ceremonies are from 8 to 12 and then we sleep and she leaves to her front house, but this ceremony extended for some more hours.

It was a private ceremony that time, with only 4 participants, and 3 of us decided to add another plant to the mixture. A 5 Meo-DMT containing plant, if you want to talk in traditional Amazonian terminology, “La Chaliponga” or “Chagropanga” is enough for me.

I remember that was the only ceremony where I was required to go to the bathroom to attend a “second grade” situation. It’s something totally normal, but had never happen to me until that one. It was a really powerful mixture and obviously she offered us the opportunity to try it, because we were not in our first ceremony. My stomach suffered really bad that night, hurt until the next day, but I’m sure it was really worth it. My body was deeply cleansed that night, I felt it.

“Elevado”–that’s the word Kuyay uses to refer to the ayahuasca visionary state. Really accurate since “elevado” means high, and your spirit is vibrating in higher frequencies, it’s a state that can be described in many ways, don Juan Matus says that in ancient mexican sorcery, it was called “ver” or ¨see¨ if we translate it into English. When you are “elevado” the least you can expect is to vomit, the purge

Being “elevado” means, sometimes, see what your eyes are seeing. You enter in some sort of outside perspective, more like universal, and you can even feel that connection if you’re lucky. When you feel it, it’s another step of being “elevado”, it can also be called “The Universal Consciousness”, the connection to god.

If you stop to think that mind and spirit are the same thing, one can say that mind is not only in the body, maybe not even close, and can vibrate to higher states of consciousness, or what if it’s already there all the time but we were made to not see it?

The mind can be inter-dimensional, and ayahuasca gives you the ability to prove that.

It is nice to know also for participants, that Kuyay has direct contact with a medical center in Argentina where they use ayahuasca with the help of other physicians, so we can be sure that she knows everything about possible medical complications and specific situations. She is regularly checking with them, regarding anything medical.

Once I was taking some antibiotics one week before the ceremony; I felt the need to let her know–to which she checked with the center, and then we were confident I could proceed with the ceremonies. We are very secure in the medical part. Kuyay’s sister, Jessica, also an ayahuascera, is one of the people in charge of the ceremonies in the city of Rosario, Argentina.

Kuyay administers ayahuasca healing ceremonies in Costa Rica. Participants come form all over the world. If you’re considering to come, I can serve as a witness that the metamorphosis experienced after going to visit Kuyay and grandmother ayahuasca–it was nothing less than profound.

Thank you Kuyay and Howard, for making all this possible. 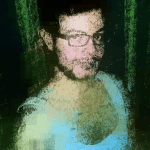 Andres Campos says ayahuasca helped him to find creativity in himself: he now writes poetry, psychological articles and dream related essays. It has been two years since his first ceremony and Andres is currently writing a book about ayahuasca. Shamanism has become the primary focus in his life.

Click here to check out the most popular section of this site Ayahuasca Retreats.